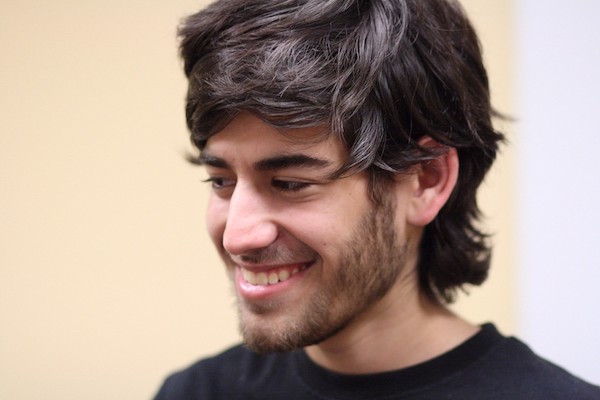 Today, as is our tradition, we write to mark the anniversary of the passing of Demand Progress’s cofounder, Aaron Swartz.

As many of you know, Aaron took his own life six years ago — while absurdly being threatened with more than 50 years in prison for allegedly using MIT’s open campus internet network to download too many academic articles from the cataloging service JSTOR, to which he had legitimate access.

Here is an obituary of Aaron written at the time by Glenn Greenwald.

And here is a compendium of tributes to Aaron from the days following his passing.

Aaron is often described as a technologist and and internet freedom activist. He was indeed both, but he was also so much more. The richness of his vision is perhaps best observed through a negation: While he was was a formidable programmer held in the highest esteem by the foremost coders of his generation, he was conspicuously not a cyber-utopian, an acolyte of the so-called California Ideology that naively (and sometimes cynically) espoused the notion that new technology and information access would, on their own, necessarily change the world for the better.

Rather, Aaron understood that technology could be used for good or for ill, and its promise would be realized only if it were made appropriately subject to democratic control.

We always miss working alongside Aaron, but that’s truer than ever in this moment as we have come to recognize the imperative of asserting popular authority over not just technological phenomena, but over our government and society more broadly.

Aaron would recognize both the promise of the present political moment alongside its inherent danger. We wish he were here with us — and know we’d be more formidable if he were — as we persist in the perpetual struggles to ensure that our communications infrastructure is one that facilitates democracy, that monopolists are forced to relinquish their outsized power over our economy and politics, that we are able to roll back unconstitutional wars and constrain the authoritarian tendencies of our current President. We wish he could join us and our allies as we more broadly strive to compel the institution of a progressive social contract that can sew our society back together and build the foundation for generalized prosperity for generations to come.

While Aaron is no longer by our side, we are ever hopeful that he would be proud of what Demand Progress has become — and we’d like to take a moment to share with you some of what we’ve accomplished over the last year or so.

–David and the Demand Progress team.

P.S. If you would like to support our work as we carry these fights into 2019, please click here.

We are confronting corporations that have too much power over our economy and our government:

We are helping push a more progressive foreign policy and national security vision:

We are helping fix Congress to make it more democratic and progressive:

Thank you for taking a moment to remember Aaron with us, to consider his legacy, and to learn more about the work we carry forth in his name.

Please consider making an ongoing or one-time contribution to Demand Progress to help power our work in 2019.

Today we remember Aaron. was originally published in Demand Progress on Medium, where people are continuing the conversation by highlighting and responding to this story.