It’s national Small Business Week, and nearly 6,000 small businesses, ranging from construction companies to tech startups have signed on to an open letter to Congress calling on lawmakers to support the Congressional Review Act (CRA) resolution to block the FCC’s repeal. Small business owners hosted delivery events at congressional offices across the country,

Net neutrality supporters also crowdfunded to put up billboards in key states like Colorado, Louisiana, and Ohio as well as full page newspaper ads in Alaska and Maine highlighting the concerns of the thousands of small business owners signing the open letter.

See NEW PHOTOS of the delivery events, billboards, and newspaper ads here, these are available for use by press: https://imgur.com/a/GdlRLKF

To date, nearly 6,000 businesses have signed the letter, including veterinary offices, graphic design shops, restaurants, medical startups, music venues, attorneys, tutoring services, chiropractors, engineering firms, and an amusement park machine supplier. Businesses are being listed publicly on the letter in a rolling fashion as they are verified.

The nationwide push is supported by a range of groups representing startups and small businesses including the American Sustainable Business Council, Etsy, Patreon, Engine Advocacy, Main Street Alliance, Good Business Colorado, and Small Business Majority, along with groups like Fight for the Future, Demand Progress, and Color of Change.

Ryan Rabac of the American Sustainable Business Council said, “Recent data shows a majority of small businesses oppose the repeal of net neutrality. They fear a potentially devastating impact on innovation, fair competition, and access to customers. Instead, we must restore protections for millions of businesses and consumers. ASBC and its national network of businesses stand with these members of Congress working to protect all businesses by restoring net neutrality.”

“The loss of net neutrality will hurt all small businesses, not just high tech ones like those I work with,” said Chris Reade President and CEO of Lookfar in New Orleans, LA, “Without these basic protections, businesses that put food on the table for hard working Americans won’t be able to compete with big corporate giants.”

“Our small Alaska-based technology business depends on affordable access to an open, neutral Internet to deliver training, software updates and data to customers around the state,“ said Julie Olsen, President of OfficeTECH, Inc. in Anchorage, AK. “We need lawmakers to just say “NO” to deep pocketed ISPs plans for fast lanes online and, instead, vote to protect Alaskan businesses and their employees by supporting the CRA resolution to overturn the FCC’s repeal and put strong net neutrality protections back in place.

“When senators vote on the resolution to restore net neutrality this month, they’ll face a stark choice. They can use their power to back the ability of monopolistic telecoms to block and slow traffic online for their own profit, in a manner that will strangle small businesses. Or they can stand with Main Street and the small companies that are the lifeblood of their communities.” said David Segal, Executive Director of Demand Progress.“Net neutrality is about free expression – but it’s also about people’s bottom lines, their jobs, and their abilities to provide for their families. Without an open internet that allows them to compete and to reach customers online, small businesses will fold. Any senator who votes against the net neutrality CRA resolution is voting against the small businesses in their communities.”

“Almost everyone who works at Fight for the Future has run a small business at one time in our lives, and we’ve connected with thousands of them through the massive online protests we’ve organized,” said Evan Greer, deputy director of Fight for the Future, “without net neutrality, the largest companies will become even more dominant, while family-owned businesses, innovative startups, small shops, and freelancers will be squeezed out. It’s a tax on the entire economy for the benefit of a few giant telecom companies.” 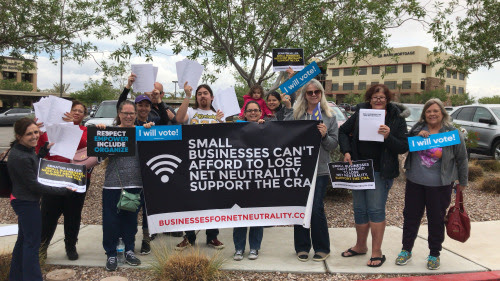