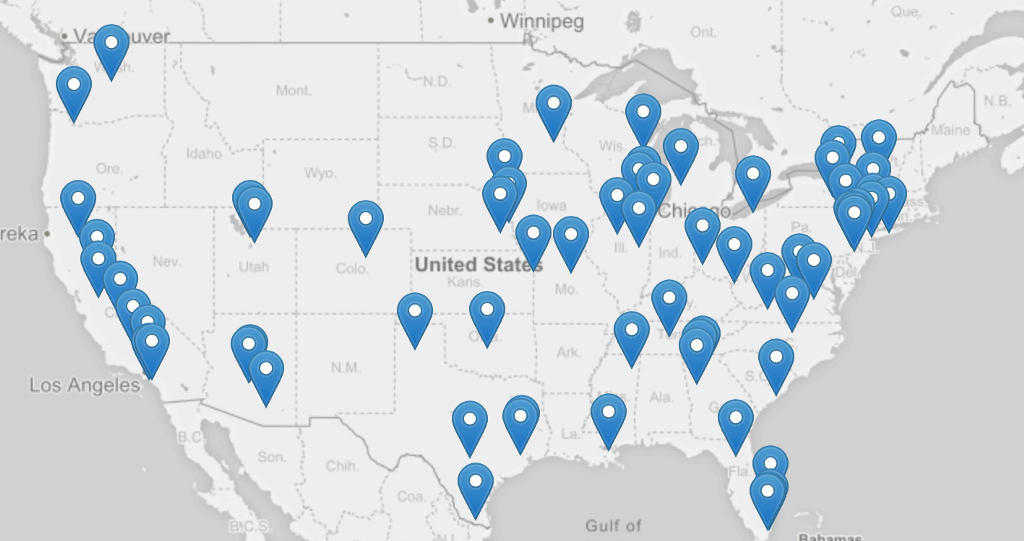 Mark Stanley is director of communications and operations for Demand Progress.

As members of Congress head home for August recess and shift focus to the midterms, they should remember images from last week of activsists across the country demanding support for the Congressional Review Act (CRA) resolution to restore net neutrality. SEE PHOTOS BELOW.

Last Thursday, July 19th, nearly 70 protests and letter deliveries were held across the country, in Congressional districts of potential swing votes on the Congressional Review Act (CRA) resolution to restore net neutrality. At the actions, constitutents delivered letters to offices signed by nearly 7,000 small businesses in support of the CRA resolution.

The actions were held in locations as geographically diverse as Anchorage, AK, and Newnan, GA. Despite differences in region and population, each event had one thing in common: Constituents delivered an unequivocal message to lawmakers that they want them to support the CRA resolution, which is Congress’s only viable means to to restore net neutrality protections this year.

The CRA would reverse the disastrous move by Chairman Ajit Pai’s FCC last December to gut net neutrality protections— a move opposed by 86% of Americans, including 82% of Republicans.

What’s amazing, but not surprising to anyone who has worked on this issue, is that after years of sustained activism, the public refuses, flat out, to give up on net neutrality. Their lawmakers shouldn’t either.

One would be hard pressed to find a policy coming out of Washington in recent decades that is as universally opposed as the FCC’s net neutrality repeal. Without strong net neutrality rules, monopolistic internet providers like Comcast and Verizon can slow and block online traffic, which will be devastating for free expression, small businesses, and the countless other ways the public depends on an open internet, from jobs, education, and healthcare, to news and enterainment.

Before the FCC repeal in December, thousands took to the streets at Congressional offices and Verizon stores, in protest. This kicked off a heightened wave of activism, in which millions contacted their lawmakers in support of restoring net neutrality. It also led to a vote in the Senate, in which the CRA resolution to reverse the FCC passed with bipartisan support, 52–47.

What’s amazing, but not surprising to anyone who has worked on this issue, is that after years of sustained activism — from the leadup to the FCC passing strong open internet rules in 2015, to opposition to the FCC’s repeal in 2017 under Chairman Ajit Pai, to mobilzation in support of the CRA resolution in Congress this year — activists refuse, flat out, to give up on net neutrality. Their lawmakers shouldn’t either. The open internet is crucial to too many people — the support for it cuts across party lines outside Washington, and across demographics and generations.

Last week’s activism also followed on the heels of Rep. Mike Coffman (R-CO) becoming the first GOP House member to sign the discharge petition to force a vote on the CRA. This was another major milestone in the fight to save net neutrality— one that many skeptics said would never happen, just as they said the Senate would never pass the CRA. Time and again, the massive and energized open internet movement has proven Beltway pundits wrong when it comes to what’s possible on net neutrality.

Now that the first Republican has joined 176 Democrats in supporting the resolution in the House — which passed with the support of three Republicans in the Senate — the floodgates can open, and we can get the remaining 40 votes needed to restore net neutrality. July 19th was just the begining this summer— activists will continue to turn out in large numbers this August recess, until their representatives do the right thing and stand with their constituents on net neutrality, not Big Cable.

Dear Congress, grassroots energy for net neutrality won’t let up. Here’s proof (PHOTOS) was originally published in Demand Progress on Medium, where people are continuing the conversation by highlighting and responding to this story.