Washington, D.C.—Today, a coalition of 18 organizations coordinated by Demand Progress Action launched a grassroots campaign calling on Congress to substantially improve the “USA Liberty Act,” H.R. 3989, or instead support strong reform legislation like the “USA RIGHTS Act,” set for introduction by Sens. Paul and Wyden early next week.

The launch of DontLetTrumpSpyOnUs.com, the campaign’s website, adds to the growing pressure from progressive groups calling on Congress to oppose reauthorization of one of the most expansive and unaccountable mass surveillance laws in American history absent meaningful reform. Anything less is to grant the Trump administration tremendous power over the privacy of every American.

On its introduction in the House, the USA Liberty Act contained major shortcomings, all of which empower the Trump administration to spy on Americans without appropriate limits or public recourse. It extends Section 702 of the FISA Amendments Act of 2008 without requiring the Trump administration to get a warrant. It also fails to end “about” collection, provide notice when intelligence information is used in criminal and other proceedings, or produce a reliable count on how many U.S. persons are being surveilled.

By comparison, the USA RIGHTS Act is expected to end backdoor searches, permanently ban “about” collection, and provides notice when intelligence information is used in criminal proceedings. It also is expected to contain a number of additional important provisions, including strengthening transparency around FISA court opinions, preventing solely domestic surveillance under Section 702, and much more.

“We appreciate the work done by the House Judiciary Committee in attempting to reach a compromise on Section 702, but we cannot support the USA Liberty Act as introduced.”

“We urge members of Congress to improve it by including a full backdoor fix, which has passed the House of Representatives twice, permanently codifying the end of ‘about’ collection, and adding safeguards against the secret use of Section 702-evidence in criminal and other proceedings. Demand Progress Action urges members of Congress to support the more substantial reforms contained in the USA RIGHTS Act, set for Senate introduction by Sens. Paul and Wyden next week, and urges incorporation of its provisions into the USA Liberty Act.”

Participating organizations include (in alphabetical order) are: 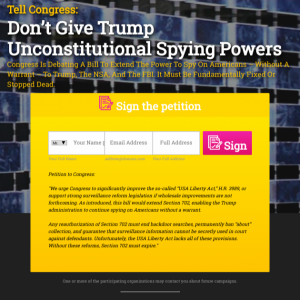